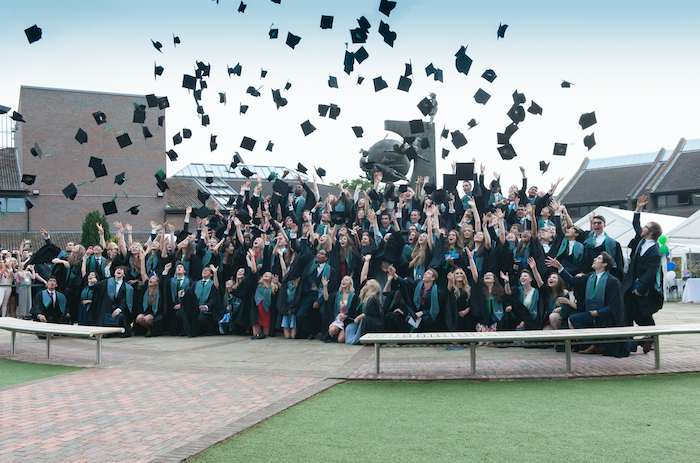 Students at the ACS International Schools have been celebrating an outstanding set of IB Diploma results, enabling them to go on to world-class universities in the UK, US and across the globe.

Fifteen per cent of the 40 final year ACS Hillingdon students were awarded 38 points or above, worth on average 236 UCAS points on the new Tariff for 2017. To put this into perspective, 4 A* grades at A-level are worth 224 UCAS points.

Diane Hren, Head of School at ACS Hillingdon, commented: “Many congratulations to the class of 2017, whose hard work, determination and commitment has really paid off in achieving such fantastic results.”

13% of the 2017 cohort completed bilingual diplomas in languages including Italian, Japanese and Spanish and many of the ACS Hillingdon leavers will be going on to study at leading universities in the UK and around the world, including UCL, Kings College, Imperial, Warwick, Georgetown, The University of Chicago and Boston College.

Gabriel Blanchard, Diploma Student and 2017 Graduate, commented: “The IB has already helped me achieve my goals as it has helped me gain a scholarship to my dream school, allowing me to study my passion which is Architectural Design. I also believe the IB provided me with a set of skills that will allow me to develop my abilities to the highest level in university.”

Ms Hren added: “I have no doubt the entire cohort will go on to achieve great things and that their time at ACS Hillingdon will have laid the foundation for even more success in the future.”

26% of ACS Cobham students were awarded 38 points or above, worth on average 236 UCAS points under the new tariff system for 2017.

Tony Eysele, Head of School at ACS Cobham commented: “We are very proud of the ACS Cobham class of 2017 – their impressive results are testament to years of hard work, discipline and dedication to task. I would like to take this opportunity to congratulate them - and their supportive teachers - for the milestones reached’.

In total 87 IB diplomas were awarded to the 2017 cohort with 18 students completing bilingual diplomas in languages including Japanese, Spanish and Dutch. Many of the ACS Cobham leavers will be going on to study at leading universities in the UK and around the world, including Edinburgh, Birmingham, UCL, Hong Kong, Amsterdam, Berkeley and McGill.

Yuta Negano, IB Diploma Student and 2017 Graduate, commented: “Of all things, I think that the IB programme has helped me develop better self-management skills. By that I mean time, task, and resource managing skills. I learned to think ahead but also be aware of what my immediate to-do list contained; to prioritise and understand my strengths and weaknesses and analyse how best I could get help and improve. I believe that these self-management skills will help me be more productive, and more confident in tackling the goals that I set for myself in the future, whatever they may be.”

Tony added: “We look forward to hearing about the continued successes of each of our students and have no doubt that their time spent at ACS, completing the demanding IB Diploma Programme, will provide an excellent foundation for the next steps in their respective educational journeys.”

38 per cent of the 62 final year ACS Egham students were awarded 38 points or above, worth on average 236 UCAS points on the new 2017 Tariff.

Jeremy Lewis, Head of School at ACS Egham, commented: “Our students have achieved incredible results, attained through hard work, determination and commitment. The class of 2017 have been a truly fantastic example to the school.”

14% of the 2017 cohort completed bilingual diplomas in languages including Swedish, Russian, Dutch, Indonesian and Danish. Many of the ACS Egham leavers will be going on to study at leading universities in the UK and around the world, including Imperial, LSE, St. Andrews, NYU, McGill and UCLA.

Aditya Sharma, IB Diploma Student and 2017 Graduate, commented: “I think because the IB is so analytical in its approach, with a greater emphasis on gaining understanding rather than just memorising facts, it's a system that adapts us more to real life rather than stopping at our school education.”

Jeremy added: “The entire cohort should feel immensely proud of all they have achieved with the IB Diploma Programme and I know this will be a great springboard into the next chapter of their lives – academically, professionally and personally.”

ACS International Schools recently published the results of research which revealed that UK admissions officersrated the IB Diploma Programme over A-levels and Scottish Highers as the best preparation to thrive at university.

University skills best provided by the IB Diploma Programme include encouraging independent enquiry, cited by 94 per cent of officers; self-management skills, 91 per cent and nurturing an open mind, 93 per cent.