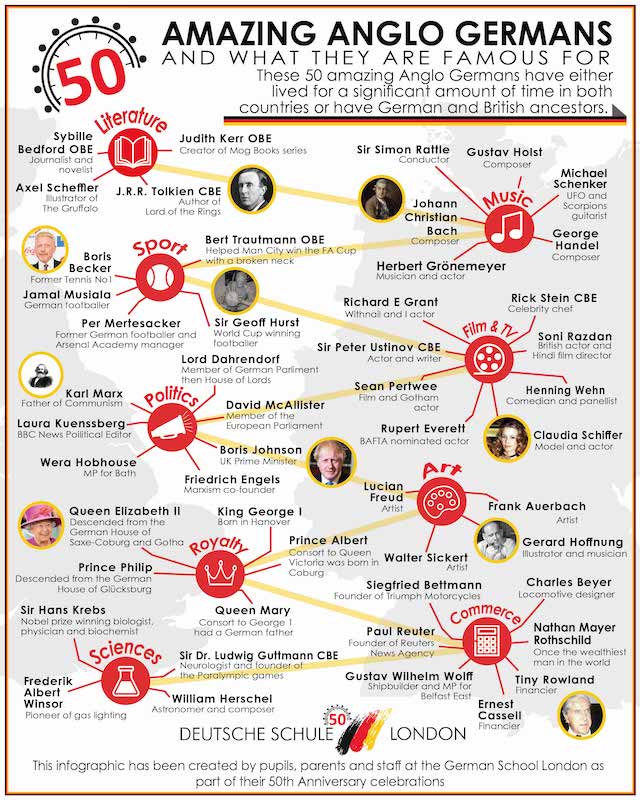 To celebrate its 50th Anniversary Year the German School London has created an infographic to celebrate 50 Amazing Anglo Germans including the Queen, Prince Phillip, Bert Trautmann and Sir Simon Rattle.

Did you know that when the Queen and Prince Phillip married in 1947, they also formed a union of two famous German Royal Dynasties, of which they were both descendants; House of Saxe-Coburg and Gotha and House of Glücksburg?

The Queen and Prince Phillip are just two of the Amazing Anglo Germans celebrated in a new infographic created by pupils, parents, and staff at the German School London as part of their 50th Anniversary celebrations. In addition to members of the Royal Family, the infographic features a wide variety of well-known politicians, artists, actors, writers, entrepreneurs, musicians, and sport stars, all with strong links to both England and Germany.

Lord Dahrendorf served in both German and British parliaments in his lifetime. After being arrested and sent to a concentration camp as a teenager, he later became a member of German parliament before moving to Britain in the 1970’s, becoming a Liberal Democrat MP and later receiving a life peerage.

British born conductor Sir Simon Rattle rose to prominence as Music Director of the City of Birmingham Symphony Orchestra but was then Principal Conductor of the Berlin Philharmonic for 16 years. He has recently applied for German citizenship.

Bert Trautmann was a German paratrooper in World War II who was captured and held prisoner in England. When the war ended, he refused repatriation and settled in Lancashire. He was an exceptionally talented goalkeeper, signing for Manchester City in 1949. In 1956 he helped the club win the FA Cup final despite having broken his neck during the game!

The German School London is a bilingual school providing students with the best of German and English education, so the community wanted to shine a light on those unique individuals who have benefited from both German and English influences in their lifetimes.

The German School London’s Commercial Director, Matthias Krauss commented: “It has been wonderful to see pupils, parents and staff working together on the research to identify these fascinating Anglo Germans. They discovered many more amazing Anglo Germans who could have featured on the list, a testament to the close connection between Britain and Germany over the years. We look forward to sharing the stories of these others in our future anniversaries.”