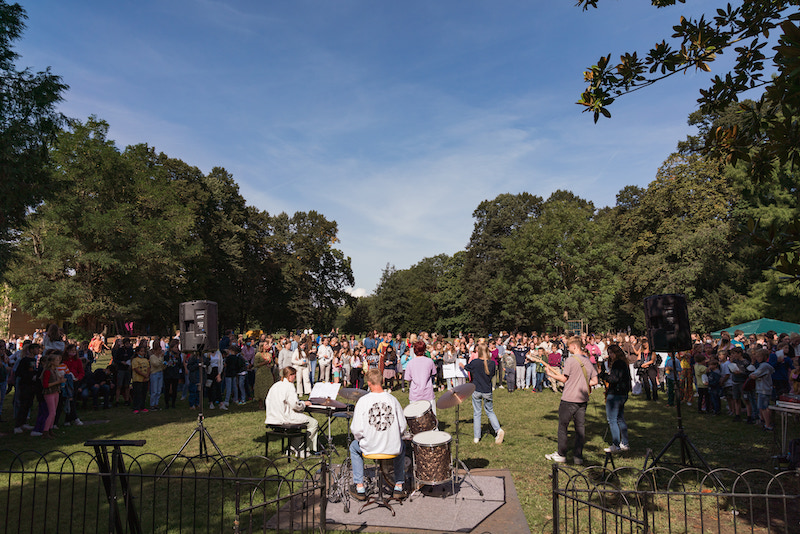 50 years ago, on the 20th of September 1971, a VIP reception was held at Douglas House in Petersham, South West London. The party, which included the German Ambassador of the Federal Republic of Germany, Karl-Günther von Hase and the British Secretary of State for Education, Margaret Thatcher, was there to officially launch the first German School in the UK. The next day, on the 21st of September, 84 pupils walked through the doors of Douglas House to start their first day of school.

50 years later and German School London has grown to over 800 pupils, from ages 3 to 18 years and from over 30 different nations.

On Tuesday 21st September 2021, the whole community gathered to celebrate their 50th birthday. Also in attendance was the school’s original secretary in 1971, Roswitha Guest, and a delegation from the German Embassy which included the Head of the Department for Culture and Education, Dr Susanne Frane, who commented:

"It was so good to see the school so full of life and energy after the long COVID-19 break. It is inspiring to see such a strong community learning and shaping the future together.”

All the pupils and staff were encouraged to dress in seventies attire and the students put on seventies dance and music performances. A selection of pupils also re-enacted the very first day of school at the German School London 50 years ago.

This is the first of several events the German School London has planned to celebrate their 50th Anniversary year. School Head, Christian Nitschke, was delighted to see all the students embracing the opportunity to celebrate and learn about the school’s history:

“For five decades now, the German School London has been a place of enthusiastic teaching and learning, of building bridges within and beyond our community. Seeing our students navigate comfortably between languages, cultural mindsets and critical perspectives, is certainly one of the most rewarding parts of my role at the school.”