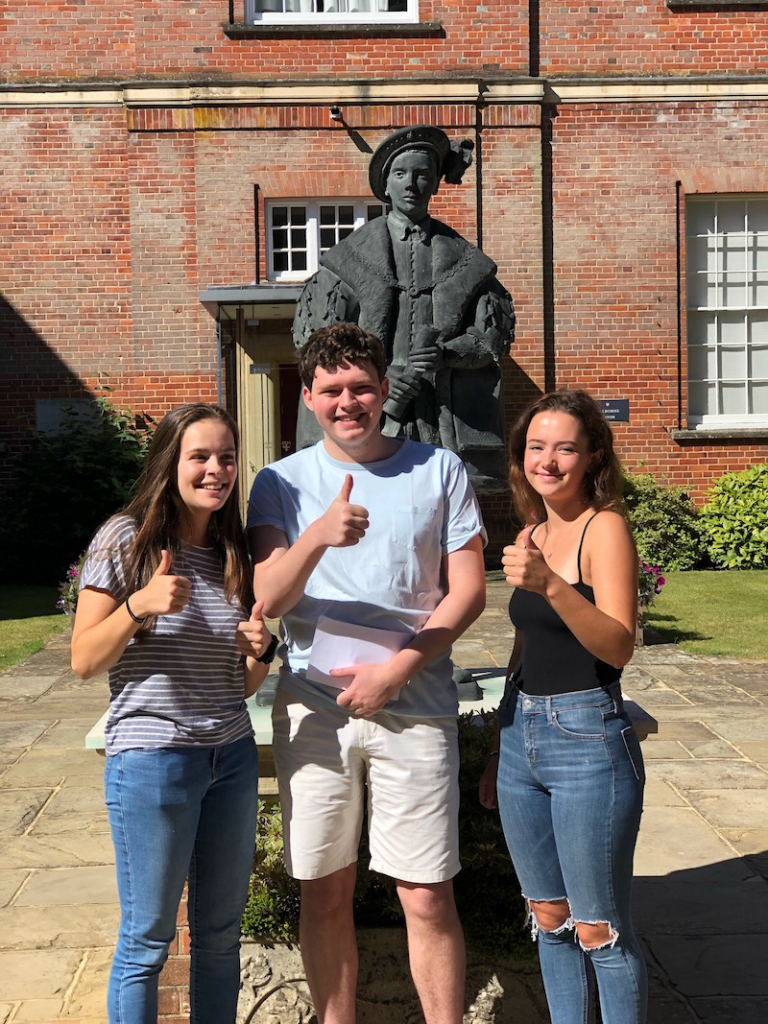 The Diploma programme – considered to be the global “gold standard” for school leavers – is followed by the majority of King Edward’s 165 Sixth Form pupils. Every student passed the stringent requirements, with an average score of 34.5 points, well outstripping the worldwide average for IB students of 30 points out of a possible 45. 56% of individual subject grades were 7 or 6 – the equivalent to A-level A* and A, which – when it is considered that candidates study six subjects rather than three or four - is an outstanding achievement.

A key advantage of the IB is that, with results published on 6th July, the successful candidates can now relax during the summer, safe in the knowledge that they have achieved entry to their chosen university. Top scorer this year was King Edward’s Head Girl Gabriella Brantley, who scored 42 points and heads to UCL to read Law. Close on her heels were two local pupils: Shannon White, from Guildford, whose 41 points sees her off to Cambridge to read Geography, while Bronnie Challinor, from Wormley, matched her score and will read International Business at Loughborough University. Highest scoring boys included Jacob Trevor from Woking, the Head Boy, who will read Computer Science after a gap year, and Laurin Lanz, who takes up a place at Southampton, also for Computer Science. Shannon, Bronnie and Jacob have all attended King Edward’s since Year 7, whereas Gabriella and Laurin joined the School in the Sixth Form.

Shannon White said, “I’m happy, relieved and thankful I get to go to my first-choice university, Cambridge. It’s been difficult at times, but today’s joy makes it worth it.”

Shannon’s parents Mr and Mrs White were delighted, saying “We are so proud and thankful. Thank you to the School, the teachers, and the family for their support, and of course to Shannon for dedicating herself to her studies and achieving her best”.

Commenting on the School’s IB results, the Headmaster, Mr John Attwater said, “I am delighted for our students that these results reflect their hard work and dedication and that of our teachers. We should not underestimate the organisation and commitment of these young men and women in studying six subjects to a high level alongside the other aspects of the Diploma: the Extended Essay, which is such good preparation for University, and the Creativity, Activity and Service (CAS) pursuits which help develop the attributes that employers, universities and society are looking for in the next generations of leaders. Especially in these turbulent times the IB’s reputation as a global-facing gold standard in world education has never been more important in demonstrating that our pupils are among the best in, and ready to engage with the rest of, the world.”

Mrs Zeba Clarke, Deputy Head Academic added, “My warmest congratulations to this year’s IB cohort whose hard work and determination has really paid off. I’d also like to thank Richard Davies, Head of Sixth Form, and all our staff who have dedicated themselves to supporting pupil achievement and wellbeing. Our greatest satisfaction comes from helping our boys and girls to reach for their dreams, and this year, they have achieved results that open the doors to exciting and fulfilling futures.”

King Edward’s Witley, one of Surrey’s leading independent co-educational day and boarding schools, celebrates 15 years of running the IB in September 2019. The IB was first introduced in a British school in 1971.