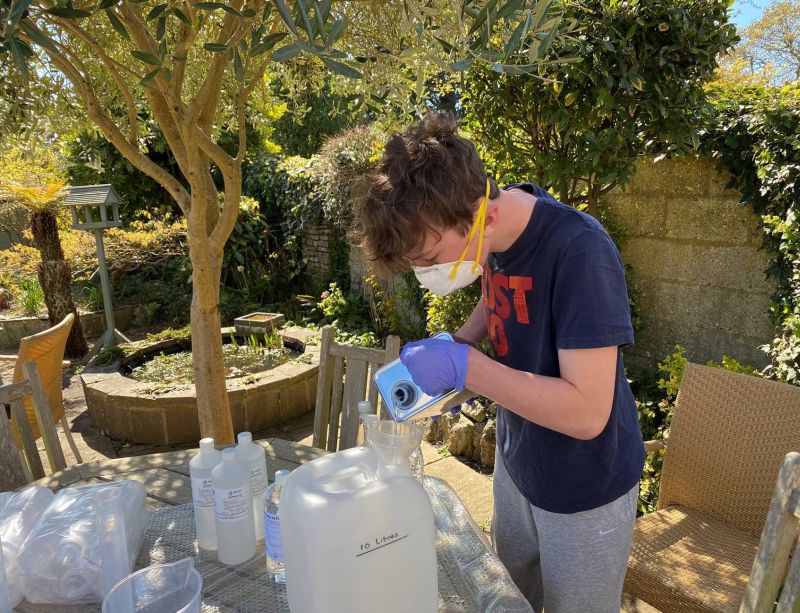 A Year 9 pupil from King Edward’s Witley is helping to ease the shortage of hand sanitiser in his local community by producing the essential antibacterial cleanser in his back garden.

Christopher Hooper, (aged 13) is from Chichester and usually boards at King Edward’s Witley. He has been making isopropanol (also known as isopropyl alcohol) hand sanitiser to a formula released by the World Health Organisation (WHO) using ingredients kindly funded by his parents.

To date he has produced and supplied hand sanitiser to protect more than 100 people during lockdown, while still continuing his education via King Edward’s dedicated distance learning programme. The sought-after sanitiser has been given to friends, family, key workers and others in need, including 25 litres to a local care home and further quantities to a local doctor, an orthodontist and even the Chaplain of the University of Chichester. So far Christopher has made and bottled a total of 80 litres of hand sanitiser!

Christopher wanted to help in any way he could with the challenges the local community is facing in terms of the shortage of hand sanitiser. He said, “It is not always possible to wash our hands when we are out of the house buying food or for people who have to go to work like our postman. This sanitiser just evaporates off your hands so can be used anywhere. I wanted to help keep people safe and this was a practical way I could contribute. I enjoyed measuring and mixing the chemicals and giving the bottles away. People seemed very grateful for it and I have had a number of requests for additional supplies.”

Mr Dan Tobias, Housemaster of Edward House (the house to which Christopher belongs) at King Edward’s Witley said, “We are extremely proud of Christopher and full of admiration for his decision to use his spare time so productively, taking such care to deliver a quality end product. His actions will go some way to providing much needed personal protection during the COVID-19 pandemic.”

Christopher’s efforts have attracted media attention including BBC Radio Surrey, who picked up the news on social media before interviewing him live this week. Christopher’s commendable forward thinking will also be recognised by the School, earning him points towards his #KESWCertificate for his contribution to the community.