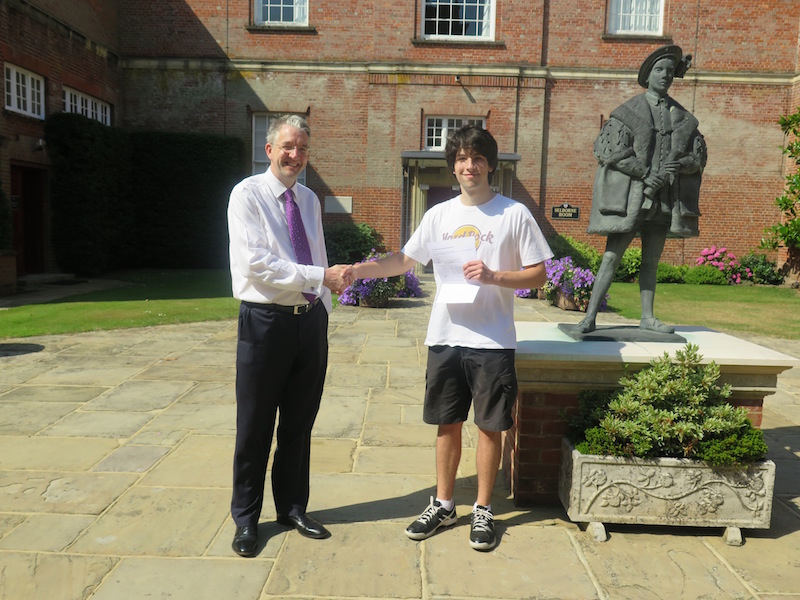 The Diploma programme – considered to be the global “gold standard” for school leavers – is followed by the majority of King Edward’s 180 Sixth Form pupils. Of the 94% of pupils who achieved a pass in the diploma, the average points score this year was once again well ahead of the worldwide average for IB students, which is 30 points out of a possible 45.

Top scorer, and equaling the School’s record high score, was Thomas Keary from Guildford (pictured with Headmaster John Attwater), who achieved a world-class 44 points (out of 45). Thomas, who has a sister at King Edward’s and younger brother at its partner school Barrow Hills, will take up a place at Durham University to study PPE in the autumn. Even more local was Amber Standish from Witley, whose 42 points takes her to Cambridge to read Economics. Four other candidates scored above 40 and the vast majority of the cohort of 66 move on to their preferred universities in the UK, US and elsewhere.

A key advantage of the IB is that, with results published on 6th July, the successful candidates can now relax during the summer, safe in the knowledge that they have achieved entry to their chosen university. This is in sharp contrast to their A-level counterparts who have to wait until mid-August to find out their results.

Commenting on the School’s IB results, the Headmaster, John Attwater said, “This represents another very good set of results reflecting the hard work and incredible dedication of our students and teachers. We should not underestimate the organisation and commitment of these young men and women in studying six subjects to a high level alongside the other aspects of the Diploma: the Extended Essay, which is such good preparation for University, and the Creativity, Activity and Service (CAS) pursuits which help develop the attributes that employers, universities and society are looking for in the next generations of leaders. Especially in these turbulent times as the impact of Brexit is becoming felt, the IB’s reputation as a global-facing gold standard in world education has never been more important in demonstrating that our students are among the best in, and ready to engage with the rest of, the world.”

King Edward’s Witley, one of Surrey’s leading independent co-educational day and boarding schools, celebrated 10 years of running the IB in September 2014. The IB was first introduced in a British school in 1971.