100 percent of UK university admissions officers agree that being able to think and learn independently is the most important element in students being ready and equipped to thrive at university. The report also shows that more admissions officers believe that the DP is the route that most encourages independent inquiry among its students (95 percent), compared to A Levels (just 48 percent).

Dr Peter Fidczuk, the IB’s UK Development and Recognition Manager, said: “The Diploma Programme is consistently rated by university admissions officers as the best preparation for university, enabling students to confidently undertake independent study. It develops students who have expert knowledge in a number of different subjects, as well as the skills they need for academic success, such as time management, essay writing and referencing.”

The results of the report are supported by figures released earlier this year from a study conducted by the Higher Education Statistics Agency (HESA), which revealed that DP students have a 57 percent greater likelihood of attending one of the top 20 UK universities than their peers who study A Levels.

Fidczuk said: “It is interesting to see how admissions officers compare a top point score of the DP (45) with the A Level equivalent. 72 percent of university admissions officers consider the top score of the DP to be equivalent to the award of three A grades at A Level; however the two scores are very different indeed. Just 0.3 percent of DP students achieve the top score, while 26 percent of A Level students achieve at least one A grade and 12 percent overall achieve three A or A* grades.”

A high proportion of admissions officers (63 percent) say they would accept a DP student even if they hadn’t completed every aspect of the programme because they appreciate the value of the all-round academic education that the DP offers, and they value the contribution these students will make to the university course.

Fidczuk said: “Many educationalists talk about the importance of learners developing a wide range of skills. The university admissions officers report shows how ‘single-minded’ some qualifications can be, and while A Levels are excellent for developing in-depth subject knowledge, they do not develop other qualities that are highly valued by universities, such as those offered by a DP learning experience.” 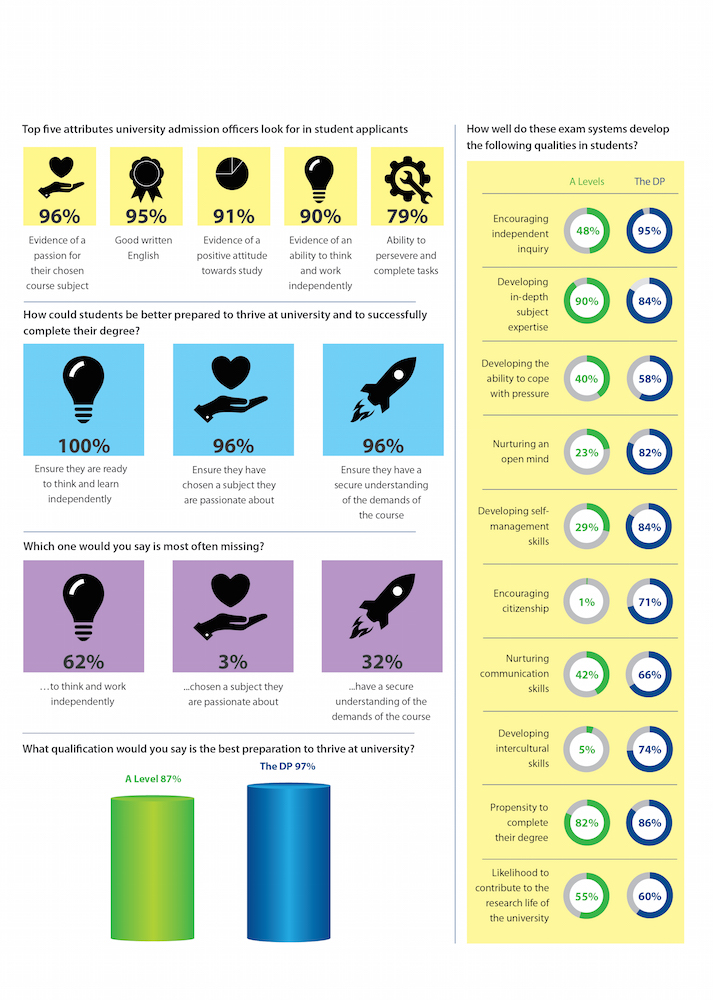