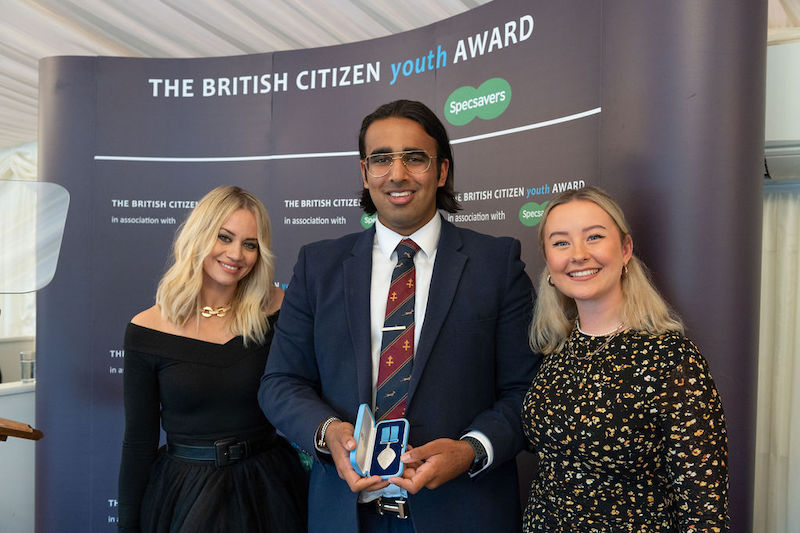 Stonyhurst is proud to announce that Head Boy, Dilip, aged 17, was recently awarded the British Citizen Youth Award during a medal ceremony at the Palace of Westminster.

The British Citizen Youth Award is designed to recognise the individual endeavours of young people who are positively impacting their communities, helping charities, or undertaking exceptional activities in support of others.

For the past four years, Dilip has been a volunteer at a local charity called Maundy Relief, whose mission is to offer an immediate and person centered response to poverty and need and to support the ongoing well-being of those who seek its help. This year Dilip was appointed one of its youngest Trustees. He has been instrumental in raising funds for the charity, by arranging sponsored sporting events, quiz nights, a bungee jump, and most recently completing a 500 mile walk from Accrington to John O Groats with his trustees. He is part of the Climate Change Committee and is working on ways the charity can reduce its carbon footprint, including growing vegetables in their own allotment, and a bike-to-work scheme.

The British Citizen Awards ceremony was hosted by Dame Mary Perkins and Kimberly Wyatt who are Patrons of the award.

Dilip said: "The education we receive at Stonyhurst both inside the classroom and through co-curricular activities, allows us to go into the world and make the most of our talents and skills. I spoke at the ceremony about the importance of being men and women for others and of the Jesuit Pupil Profile values that are so prevalent throughout a Stonyhurst education."

Dilip is Head Boy at Stonyhurst College and is the Ambassador for Model United Nations, a platform where young people can discuss solutions for global issues. He wrote his first book in 2020, ‘COVID-19 & Coronavirus - Key Questions Answered’ and is now involved in researching health-related inequalities. Having an interest in rare genetic conditions, he has just raised £7,000 for the charity SADS UK, (Sudden Arrhythmic Death) to enable them to research and raise awareness to help other families.

During the pandemic, Dilip and his peers campaigned for people to donate old laptops to pupils that otherwise could not access schooling and is now an NHS Covid Marshall assisting in the roll out of vaccines. Dilip’s volunteering commitments have also seen him working with Cancer Research UK, the British Red Cross, and a local foodbank.

He hopes to pursue his interest in health-related inequalities at University next year following his final year at Stonyhurst studying A levels in Biology, Chemistry and Mathematics.